Continuing from the Greek Mythology Book Tag, here is the Heroes of Olympus Book Tag created by Jasmine at Flip That Page. The tag is based on Rick Riordan’s middle-grade fantasy series of the same name of which I’m a fan. It’s an entertaining story that follows the adventures of teenage demi-gods who are trying to save the world. 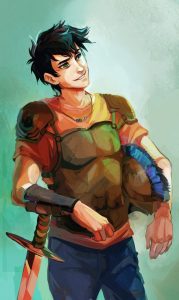 Percy Jackson: a brave, spirited, natural leader with a sarcastic sense of humor and a will to save friends and enemies alike.

END_OF_DOCUMENT_TOKEN_TO_BE_REPLACED

I found this great book tag on My Tiny Obsessions. It was created by Jasmine at Flip That Page, who called it a bookish survey and included a section based on the Heroes of Olympus series by Rick Riordan, which I, of course, will do in a separate post since this would be quite long otherwise.

Zeus (Jupiter): God of the Sky and Thunder / King of the Gods

Favorite book (choose your own category!).

END_OF_DOCUMENT_TOKEN_TO_BE_REPLACED

The long-awaited final installment of the Heroes of Olympus series was released on October 7th, 2014. I wasted no time in getting it. As soon as I was finished with TIME magazine’s issue on great empires, I grabbed The Blood of Olympus to read and boy was it worth it!

So we’re done with the House of Hades and the Doors of Death. The heroes are plagued by nightmares and monsters, as always, and now they have other worries: getting the Athena Parthenos back to Camp Half-Blood before Nico disappears into the shadows; avoiding Orion’s arrows; figuring out how to stop Gaea from waking and if/when she does, how to get rid of her; and defeating the giants gathered at the Parthenon. Our heroes have a lot on their plate, not to mention their constant anxiety over their companions’ safety as well as the preservation of their respective camps. We can’t help but wonder whether the heroes will accomplish all their tasks and save the world and whether they will need therapy after the events of this book.

As always with Riordan’s books, The Blood of Olympus is fast-paced; however, it has a more mellow moments throughout that the other books. The characters reflect on their actions and futures more and they are not as obsessed with their significant others. —Well, expect for Annabeth but we’ll excuse her since she went through hell with Percy.— I was glad to see that certain characters stepped up while others took a back seat. The most improved is Piper, who starts to kick some serious ass. She finds her strength, which is in her emotions and instincts, and she trusts in it to whip a giant’s butt while soothing Annabeth, who has an emotional breakdown. I think Piper is strongest in this installment. In the other books she is too focused on her relationship with Jason, which detracts from her strength and sense of purpose. Though she does care for Jason in this one, it does not consume her purpose.

END_OF_DOCUMENT_TOKEN_TO_BE_REPLACED

And so we’re back with Rick Riordan’s Heroes of Olympus series. This time, we’re racing along with the heroes, trying to get to the House of Hades in Greece to close the doors of death! Many obstacles stand in our way and things can go horribly wrong at any minute. Percy and Annabeth are stuck in Tartarus for the while, trying to navigate the underworld and stay alive as they plod on towards the doors of death. If they are not careful, they can be vanquished at any time by one of the numerous monsters that pop up all over the place since Tartarus is their turf.

Then there are the other demigods aboard Argo II. They all have their issues and insecurities and love interests. They’ve battled mountain giants/gods, weird-looking cow monsters, pesky dwarfs, and frigid opponents. Still, they always find the time to say how much they admire/love/care for each other, seeming to never get pissed off at each other’s fuck-ups while they continue on this stressful journey.

And then there’s Nico, off in a corner, lonely, tortured by unrequited love. Poor kid. Back in the states, the demigod camps are gearing up for battle because that’s what they do. They have nothing better to think about as Gaea threatens to end the world. Apparently, it’s better to eliminate each other now so Gaea can easily cross that task off her list.

END_OF_DOCUMENT_TOKEN_TO_BE_REPLACED

Although The Son of Neptune was not a good read for me, I was still eager for the release of The Mark of Athena. Riordan ended The Son of Neptune with Argo II, Leo’s battleship, approaching Camp Jupiter. After waiting for a year, I was impatient to know if the Romans would attack first and ask questions later since there is enmity between the Greek and Roman demigod camps – whenever they get together, war ensues.

This proves to be true within the first few pages of The Mark of Athena. Those on Argo II from Camp Half-blood – Annabeth, Jason, Piper, Leo – were allowed to enter Camp Jupiter while Argo II hovers overhead. According to Terminus, the entire ship is a weapon (he is not wrong there) and thus it is not allowed inside the Pomerian Line.

Not wanting to upset the Romans, the Greeks acquiesced and entered the camp weaponless. All goes well for a while until Leo goes bonkers and opens fire on the Romans’ camp. The Romans immediately retaliate. The 7 demigods prophesized to go to Rome had to make a quick getaway. And so begins The Mark of Athena.

END_OF_DOCUMENT_TOKEN_TO_BE_REPLACED

I eagerly awaited the release of this novel but I did not enjoy it as much as I did the previous installments in the Kane Chronicles series. It was unmemorable. After I was done reading, I didn’t savor it as I usually did whenever I finished a book. Usually I would close the book, recline, and replay/review what I had read in my head, playing the parts that I favored in slow motion, fast-forwarding through others. But when I was done with The Serpent’s Shadow, it quickly became an afterthought and I was ready to move on to something new.

In The Serpent’s Shadow, the world is about to end again and Sadie and Carter has a limited time to stop it. Apophis, god of chaos wants to take out Ma’at by swallowing the sun god, Ra, and drowning the world in a swarming sea of chaos. To prevent this, Carter and Sadie must execrate Apophis by trapping his shadow, which is a part of his soul. To do this, they have to save the ghost of an evil magician, Setne, from a dire judgment, bring back the soul of their god-friend Bes to his body (a great way to practice before tackling Apophis), find the book of Thoth, tackle some demons, and semi-lose their friend, Walt. I say semi-lose here because (SPOILER!!) Walt is supposed to die and he does, but since both he and Anubis (god of the dead) wants to be with Sadie (I have no idea why), they decide to share a body so that Walt can live to be with Sadie and Anubis can also be with her through Walt (Anubis is not allowed to be with her as a god) (anyways, creepy). Since they defeated Apophis and banished chaos, severe chaos I guess, the gods of Ma’at (order) are also banished since both are connected. In effect, the gods are exiled.

END_OF_DOCUMENT_TOKEN_TO_BE_REPLACED

So. I have just completed Rick Riordan‘s new novel, The Son of Neptune, of the The Heroes of Olympus series. I was so excited to read this book. I marked the date on my calendar when this book would be expected in stores and showed up bright and early Tuesday morning (October 4th) to place the book on hold since I did not have any money to buy it at the time (you know, being a broke, unemployed, recent college graduate from a prestigious university and all). Anyways, I was totally excited and couldn’t wait to take a break from George RR Martin’s torture and enjoy some easy-going heroic adventures but I was let down.

Rick Riordan did not write up to my expectations this time. At one point I felt as if I was not reading Riordan’s work. Ok, that’s a bit harsh but I was upset. I decided to stop and re-read The Lost Hero to re-familiarize myself with the trend of the story and Riordan’s writing style. But when I went back to reading The Son of Neptune, I became disappointed again. The plot was great but the characters and pacing of certain scenes did not grab me. I just found the novel a bit rushed. I think that he was pressed for time and was unable to dedicate the time needed to fully develop the story and not make it sound so cheesy (in certain parts).