Shelf Control is a weekly meme created by Lisa at Book Shelf Fantasies where bloggers feature books they own and would like read. It’s a way for readers to take stock of what they own and get excited about the books on their shelves and on their devices.

I’ve wanted to join in ever since Lisa announced this meme, but have just gotten around to doing so. I own a lot books and though I tried to buy less this year, I went overboard due to the two bookish events I attended — BookCon and the Small Press Expo. My hope is that this meme will get me excited about the books I already own, or at least lessen my need to quickly purchase the cover that catches my eye.

Also, I just want an excuse to talk about more books so just think of this as a tour of my library.

My pick for the week: 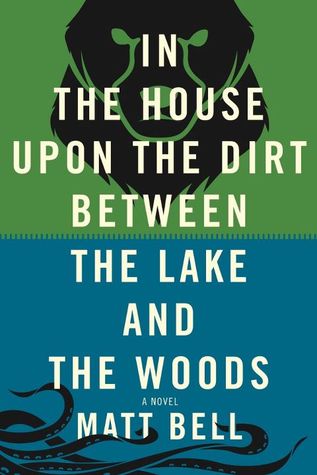 Title: In the House Upon the Dirt Between the Lake and the Woods

Genre: Fiction, fantasy (some on Goodreads have listed it under magical realism)

In this epic, mythical debut novel, a newly-wed couple escapes the busy confusion of their homeland for a distant and almost-uninhabited lakeshore. They plan to live there simply, to fish the lake, to trap the nearby woods, and build a house upon the dirt between where they can raise a family. But as their every pregnancy fails, the child-obsessed husband begins to rage at this new world: the song-spun objects somehow created by his wife’s beautiful singing voice, the giant and sentient bear that rules the beasts of the woods, the second moon weighing down the fabric of their starless sky, and the labyrinth of memory dug into the earth beneath their house.

This novel, from one of our most exciting young writers, is a powerful exploration of the limits of parenthood and marriage—and of what happens when a marriage’s success is measured solely by the children it produces, or else the sorrow that marks their absence.

How I got it: I saw it in a pile of free books at work and I recognized the title so I grabbed it.

Why I want to read it: I think I saw a review of it in a Shelf Awareness newsletter and that piqued my interest. I still would like to read it because the story sounds interesting.